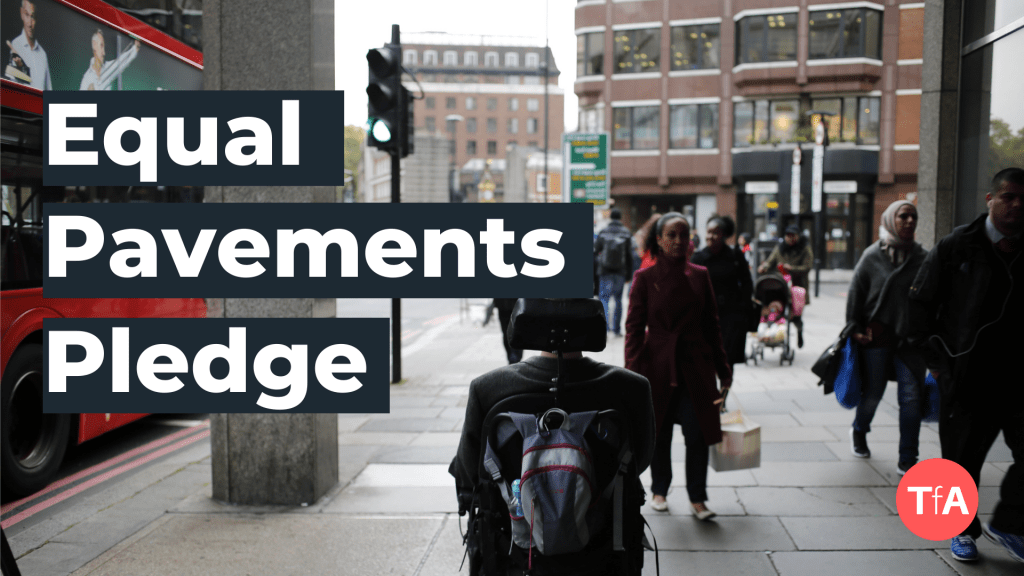 Press release Local Authorities, including Westminster City Council in London, have signed up to our ‘Equal Pavements Pledge’ to tackle the inaccessibility of streetspace, and make walking and wheeling more accessible for disabled people. The pledge outlines seven immediate and simple steps local councils can take to remove the barriers that disabled people face when […] 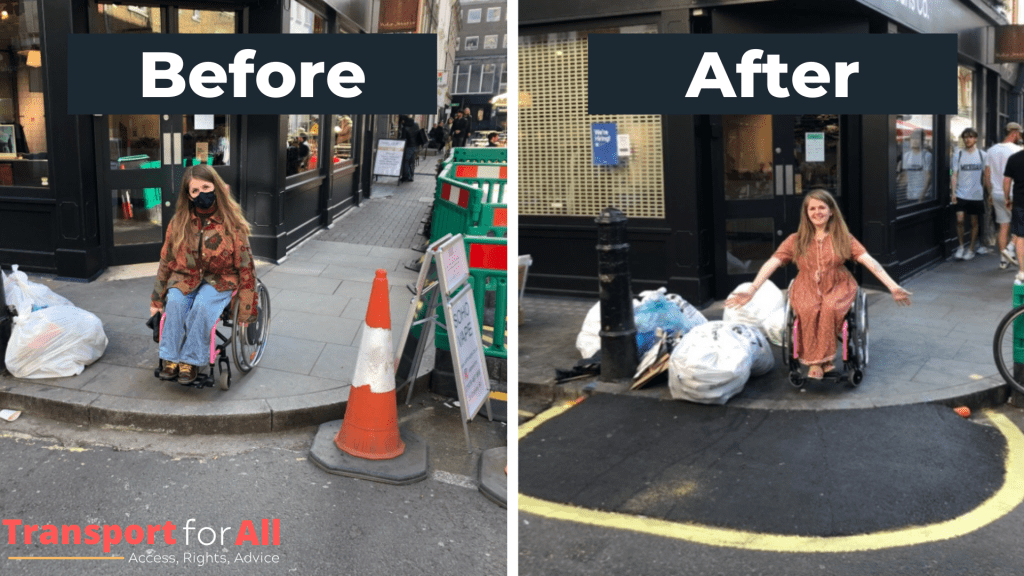 Transport For All are celebrating a positive and successful outcome from our recent targeted campaigning in Soho, which has resulted in Westminster Council taking action and implementing several interventions that have drastically improved accessibility, including new ramps in over 22 locations in the area.  Transport For All have been campaigning for accessible streetspace in Soho for years.  All the way back in 2014, […]

Our Pave The Way report: 4 months on 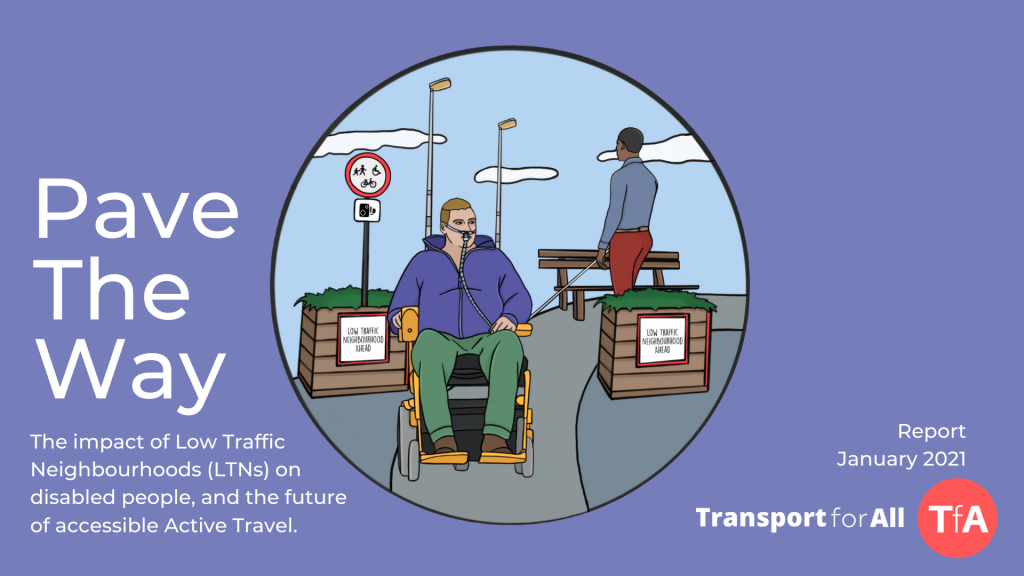 Our Pave The Way report remains the only in-depth and independent piece of research into the impacts of Low Traffic Neighbourhoods on disabled people, and has proven to be an invaluable resource to so many.   We had several goals when we embarked on this campaign. We wanted to disrupt the narrative – in public minds and in the media – […]

The Government have published their National Bus Strategy: what does this mean for disabled people? 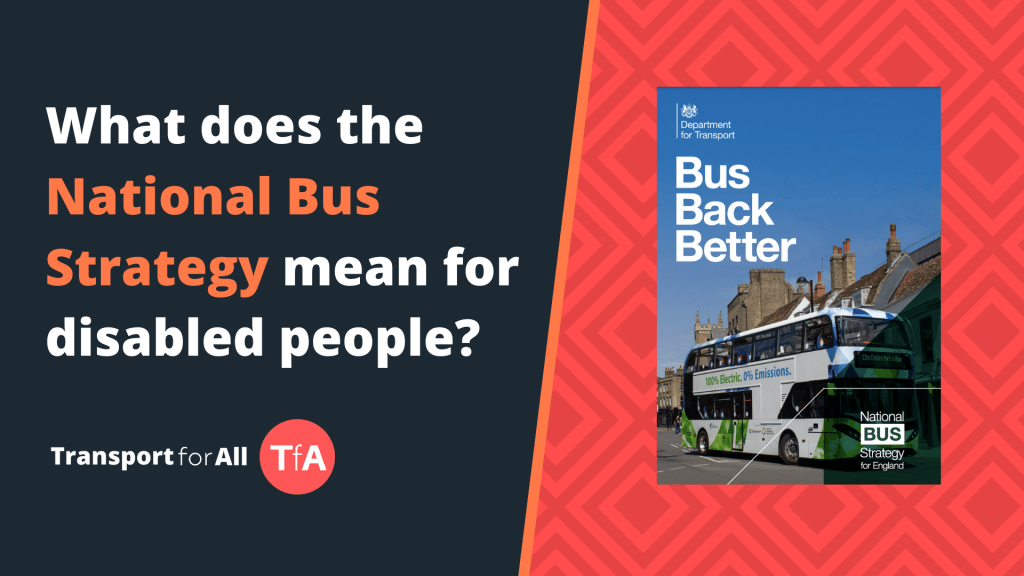 A few weeks ago, the Government unveiled their plans for a £3 billion shake-up of the bus sector, set out in the National Bus Strategy.    Unlike aviation, walking, and cycling, up until now there was no such national strategy for buses. With buses often being the most accessible mode of transport available to disabled people, we welcome this much-needed strategic attention, and […] 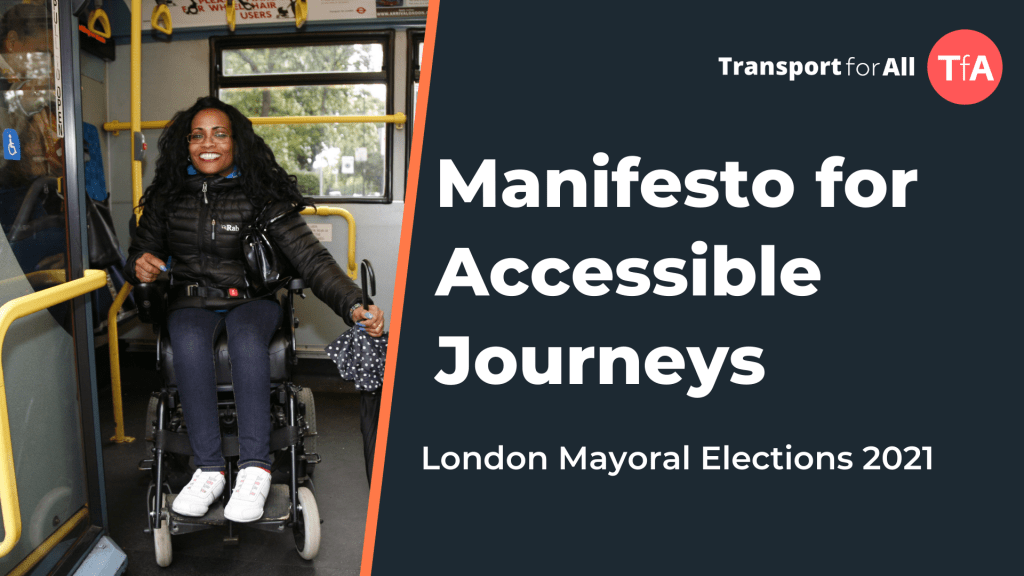 Today, Transport For All has launched our ‘Manifesto for Accessible Journeys’, ahead of the upcoming London Mayoral Election and London Assembly Elections. To download and access the manifesto: click here.   The current landscape This is an election like none we have ever seen. Originally scheduled to take place in May 2020 and postponed due […] 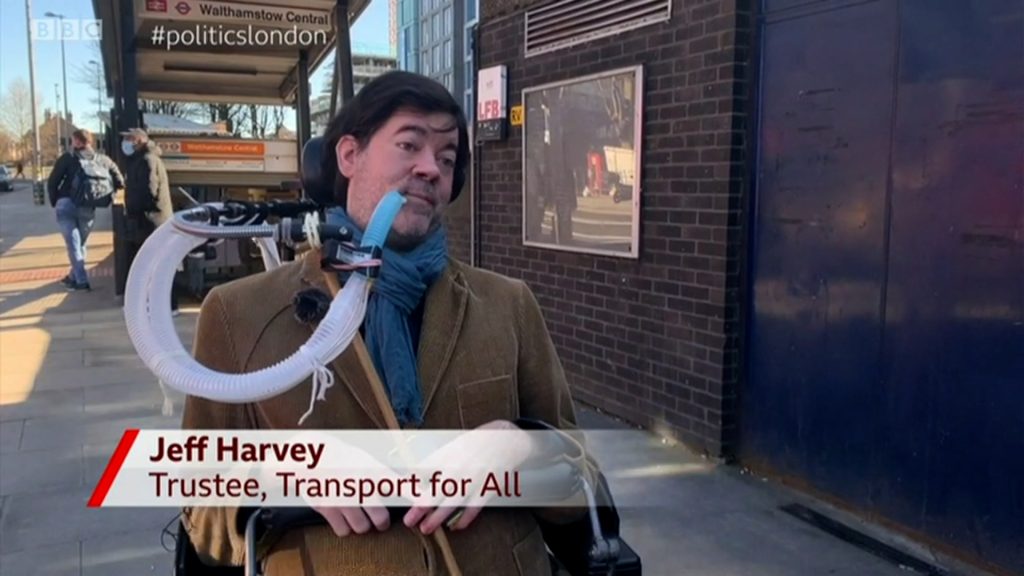 There are 270 Tube stations in London, but only 81 of these are described by TfL as being ‘step-free’. A further half of these do not have level boarding from platform to train and so require the use of manual boarding ramps. Last weekend, BBC Politics followed TfA Trustee Jeff Harvey on a trip from Walthamstow […] 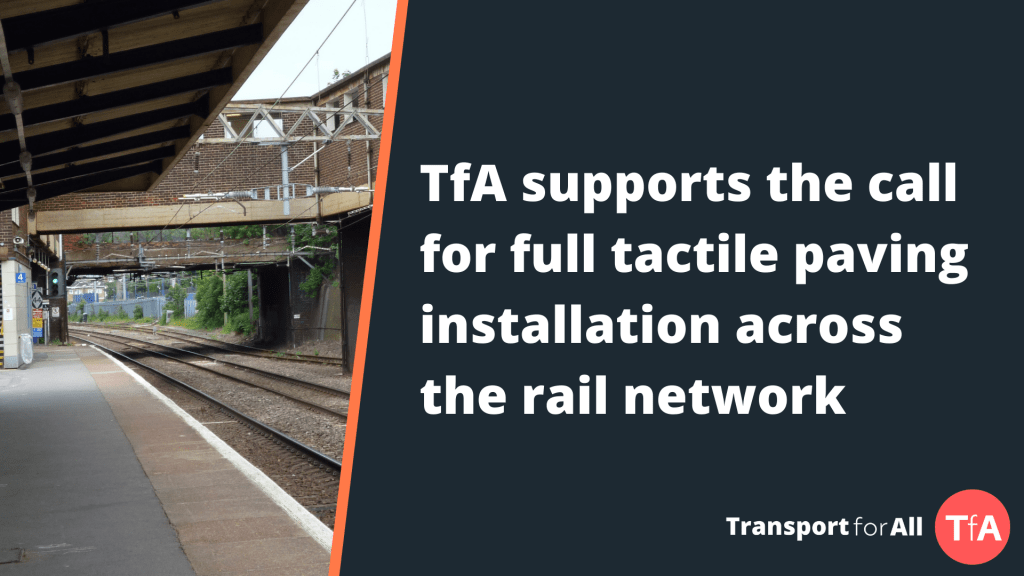 The tragic and avoidable death of Cleveland Gervais, a 53-year-old visually impaired man who was hit by a train after falling onto the tracks, was horrifying and has laid bare the appalling lack of consideration given to the safety of blind and visually impaired passengers. A recent report by the Rail Accident Investigation Branch (RAIB) […] 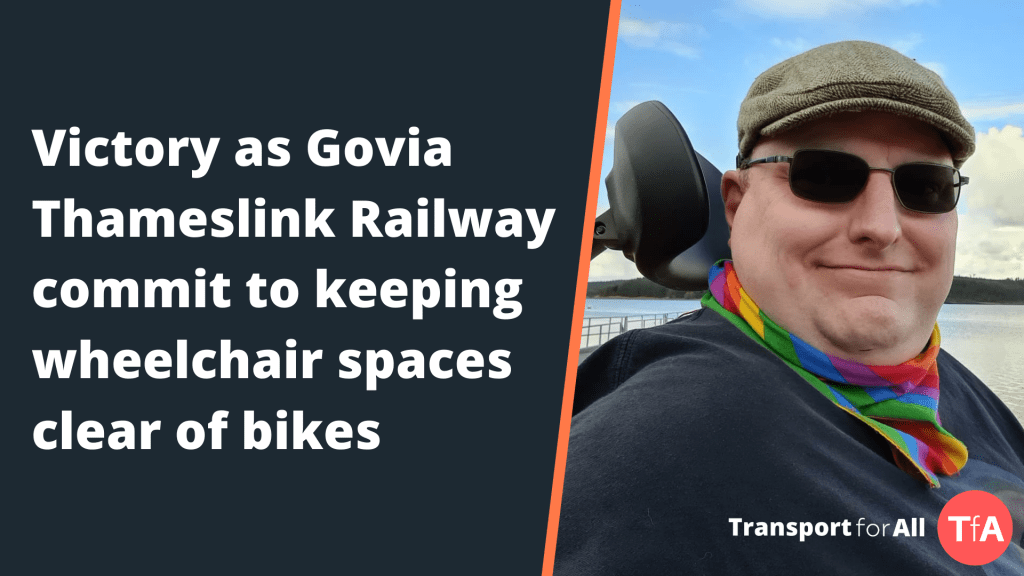 Transport for All are today celebrating the success of TfA member Doug Paulley and fellow disability campaigners who have managed to secure a commitment from Govia Thameslink Railway (who manage Gatwick Express, Great Northern, Southeastern, Southern Rail and Thameslink) to keep its wheelchair spaces free of obstructions. Previous guidance from Govia said that if a […]

Paving The Way for inclusive streetspace: our manifesto for ‘EQIAs in Action’ 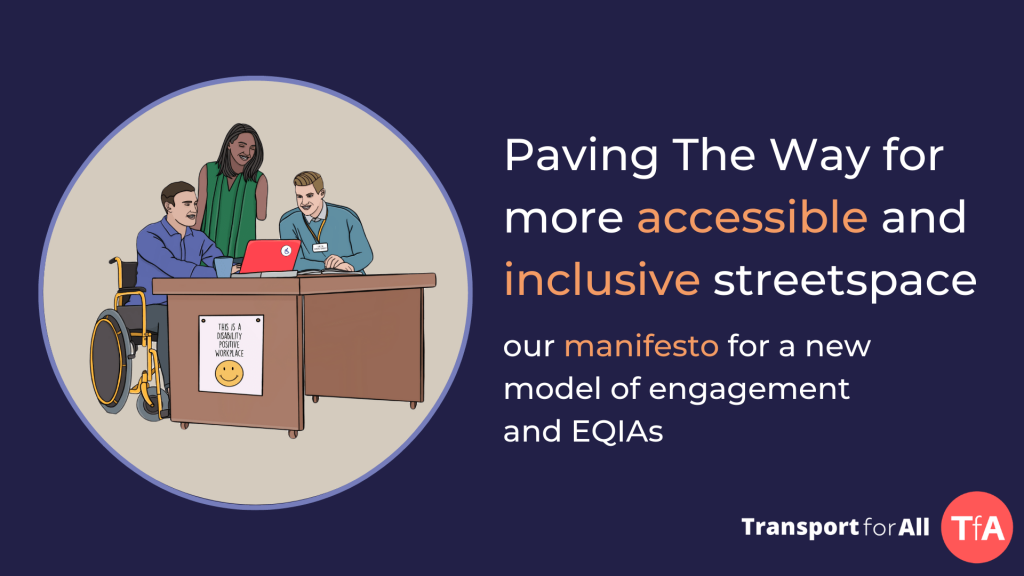 We want to see a complete overhaul of the engagement and consultation model, and a ‘rebranding’ of EQIAs… 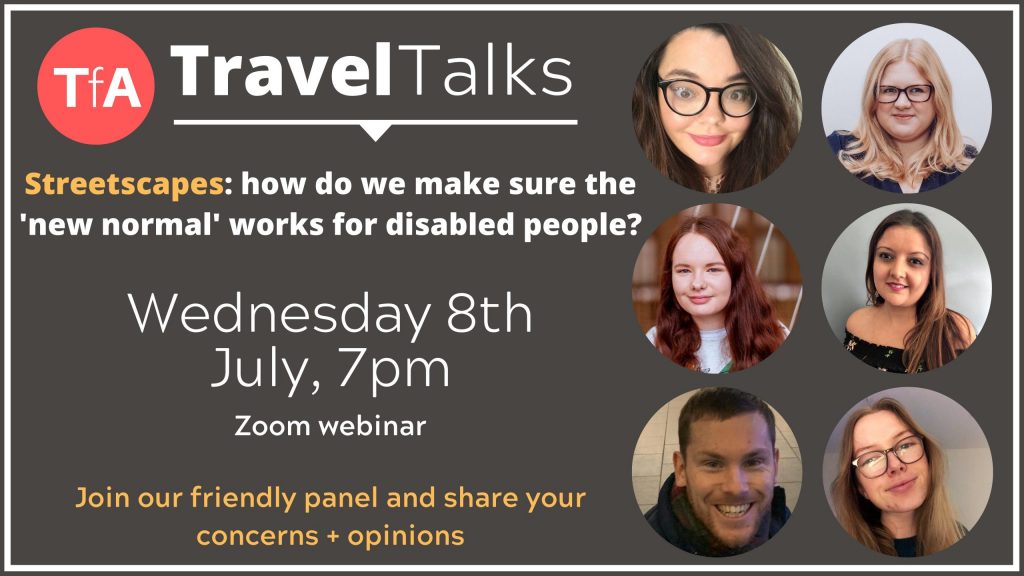 Transport for All’s inaugural TravelTalks on 8th July 2020 welcomed over 40 disabled people from across the UK, led by a diverse panel, to share perspectives on the impact COVID-19 related streetscape changes have had on their ability to navigate and move around their cities and local areas. Below you can find our summary report […]