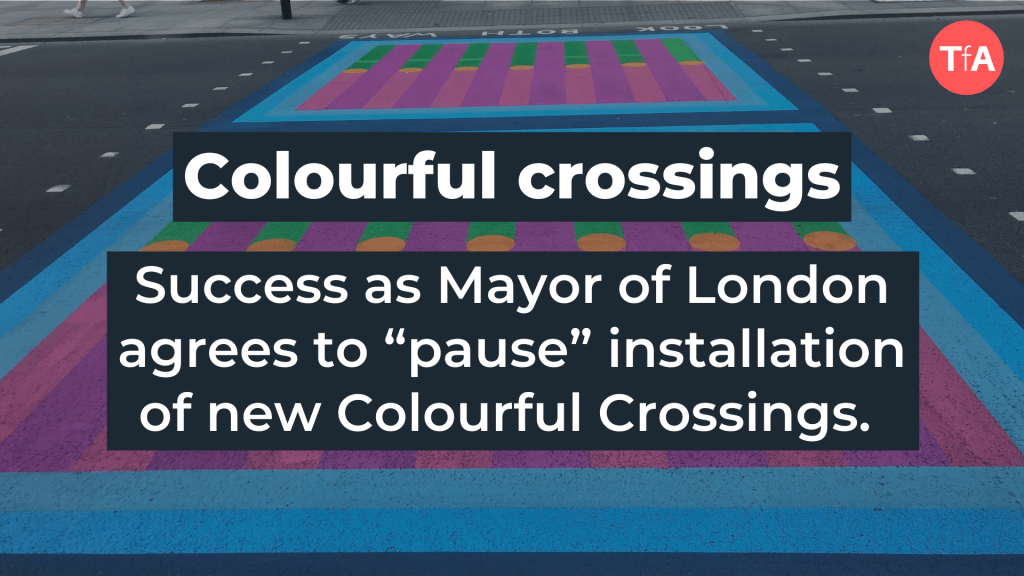 The Mayor of London has today written to Transport for All, committing to “pause” the installation of colourful crossings, following our cross-sector campaign in September.

Transport for All bought together 7 disability organisations to write an open letter to Sadiq Khan, outlining safety and accessibility concerns with Colourful Crossings.

Colourful Crossings, where the pedestrian crossing point on the road is painted over with brightly coloured – often abstract – artistic designs, are increasingly being implemented across the UK.

The letter set out our concerns on the scope and scale of meaningful engagement that had been undertaken with disabled people, and the extent to which that engagement had impacted on the decision to go ahead with the schemes. We also explained some of the impacts that the crossings have on disabled people.

In his response to our letter, the Mayor of London told us he is concerned to read of the issues we highlighted, and he committed to asking Transport for London (TfL) to introduce a temporary pause on installing any new colourful crossings on its network. He also promised that TfL will advise boroughs to do the same for roads that are not owned by TfL.

Looking ahead, the Mayor tells us that TfL plans to develop new guidance on the use of artwork at crossings in London, and promises that meaningful engagement with disability organisations will be a part of this process.

Katie Pennick, Campaigns Lead at Transport for All, said:

“We welcome this response from the Mayor and I am glad our concerns have been listened to and, more importantly, acted upon. This situation has been a perfect demonstration of the importance of involving disabled people at an early stage, otherwise the results can be inaccessible and exclusionary. We hope that local authorities and transport providers across the UK will follow London in pausing the rollout of Colourful Crossings. Transport for All looks forward to working with TfL to produce this guidance.”

Transport for All would like to thank everyone who supported our campaign, through amplifying our message and sharing your own examples of impacts. A particular big thank you to the 7 organisations who contributed to and supported the letter.

You can read the full response from the Mayor below.

Response from the Mayor of London

Thank you for your letter of 28 September about the safety and accessibility of the Asphalt Art Project.

I am passionate about making London open for everyone and that includes improving the transport network and London’s streets, making them accessible for older and disabled people and removing barriers where they exist.

The colourful crossings installed on Tottenham Court Road and in the City of London are part of a worldwide project called Asphalt Art. The aim is to transform and revitalise public spaces through the power of art, drawing Londoners and visitors back to central London.

I am concerned to read about the issues highlighted in your letter and the negative impact that these types of crossing can have on disabled people. I would like to assure you that the Greater London Authority worked closely with the London Borough of Camden and the City of London Corporation, who are responsible for the road crossings used, to deliver these projects and that public safety was at the forefront of the project partner teams. Each Highway Authority completed an Equalities Impact Assessment and a Road Safety Assessment and a number of disability organisations and charities were consulted. As a result of feedback received, specific adaptations were made to improve the designs of the crossings.

In light of growing concern about the negative impacts of colourful crossings on disabled people, and new research recently received by Transport for London (TfL), I have asked TfL to introduce a temporary pause on the installation of any new colourful crossing on its network. TfL will also be advising boroughs to temporarily pause any future colourful crossing projects. Over the next 12 months, TfL will be developing new guidance for London on the use of artwork at crossings and will undertake meaningful engagement with organisations representing the interests of disabled people. I hope you and Transport for All will agree to be a part of this.

I hope that my response reassures you that I have listened to the concerns raised by disabled people and I am committed to making London’s streets inclusive for all.

Thank you again for raising this important issue with me.