Transport for All opposes any cuts to the Freedom card scheme. According to London Councils there is a threat of funding cuts from the Government which would have a major impact on older disabled and older people in the capital.

The following press release was issued by London Councils in July;

London Councils is seeking urgent assurances that Londoners will not be hit by a change to the three year funding deal for the national concessionary fares scheme agreed by the government.

It has written to the Secretary of State for Transport, Lord Adonis, to express its fears which have arisen following discussions with Whitehall officials on how the scheme should be funded in the future.

The government announced a three year package in 2008 to help councils across the country to cover the cost of providing free off peak bus travel for disabled and older people anywhere in England. Under the deal the government was going to provide London with around £55 million a year.

London Councils is now seeking assurances that the government is not planning to reduce the funding the capital will receive in 2010/11 by up to £50 million.

The total cost of London’s concessionary fares scheme, the Freedom Pass, which incorporates the national scheme is around £240 million.

London Councils estimates that covering the cost of the possible shortfall in funding could equate to £18 on the average council tax bill or leave boroughs having to make painful decisions over levels of services.

Chairman of London Councils, Councillor Merrick Cockell, said: “It is extremely worrying that the government is even contemplating going back on its promise to provide this funding to London.

“The whole point of the three year deal was to allow boroughs to cover the cost of providing the government’s promise of free bus travel across England for our disabled and older residents. This is what boroughs have done.

“Losing this promised funding next year will leave a massive gap in council budgets which will need to be covered somehow. Boroughs are very clear in their determination that Londoners should not be short changed and that the original deal should hold in order that council tax and service levels are not adversely affected.

“We will also be seeking to ensure that London receives a fair funding deal to help pay for concessionary fares in the future.“

Note
The estimated £18 increase in council tax is based on Band D properties.

The Freedom Pass allows Londoners aged 60 and over plus eligible disabled residents to travel free on the capital’s buses, trains, London Underground, trams, and the Docklands Light Railway.

The government’s national concessionary fares scheme allows disabled people and those aged 60 and over to use their passes on any off peak bus journey in England. The council covering the place where the free bus journey begins is required to pay the cost of the journey. 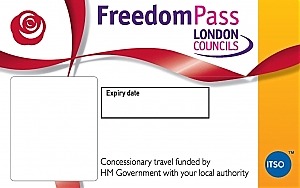