Co-Chair of Trustees, Alan Benson, is awarded MBE for services to Public Transport for Disabled People

It is with great pride that we announce that our Co-Chair of Trustees, Alan Benson, has been awarded an MBE for services to Public Transport for Disabled People. The award recognises not only Alan’s storied career and commitment to accessible transport, but also the real progress that has been made as a result of his work. In the week he is due to receive the award, we asked Alan to tell us his proudest moments, what makes a successful campaigner, and what action is needed now to make the future of transport fully accessible. 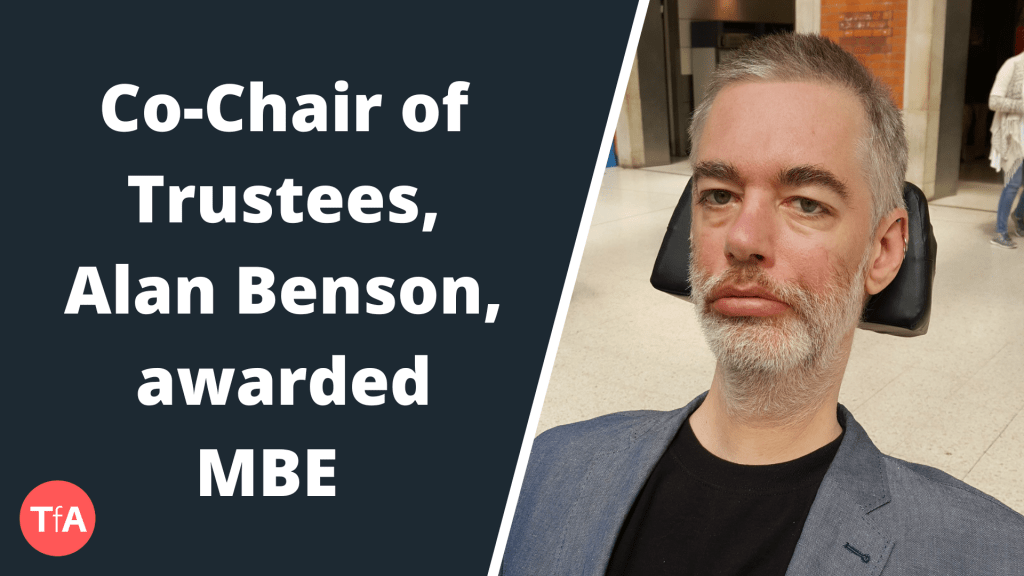 Alan’s career in activism began some twelve years ago. As a wheelchair user, he had long been familiar with the ways in which the transport system failed disabled people. But when he was left stranded on a platform in the run up to the Paralympic Games, he knew something more had to be done.

“I moved to London and started regularly commuting around 2012, when the plans for the Paralympics were in full swing, and there was this huge push from the government to present London as an accessible capital. And then, while there was all this publicity about the legacy of the Paralympics, how accessible our transport was, what an example London was going to be, I was left stranded on a train platform.

“And that’s how I got involved with Transport for All. I decided to go to a couple of meetings held in parliament, and was involved with Channel 4’s ‘No Go Britain’ documentary. I was introduced to the then Campaigns Officer at Transport for All and the Director who got me to join the Board of Trustees, and the rest is history.”

Since joining Transport for All’s Board, Alan has overseen a number of highly influential campaigns, from the fight to make Crossrail accessible, to improvements to patient transport, to demanding that Access for All funding be restored to stations, and many more. But some of Alan’s proudest moments as an activist are the ones that have gone less noticed by the headlines.

“The campaigns I remember are the ones that make the greatest amount of change, even if they’re not obvious, even if most people won’t see them. So, for example, there is now a new standard of lift signage across the London Underground: it makes a lot more sense, is less technical, more human, more accessible. And a lot of people won’t have noticed this change. But for many disabled people, this makes a huge difference to their ability to navigate stations and move through the world freely.

“I’m also really proud of the training we did with senior staff at the Underground. Often the most important work we do is changing attitudes, changing industry standards, because this is what results in lasting, widespread change.”

The necessity of changing industry wide standards can also make campaigning for accessible transport particularly difficult. Power and responsibility are dispersed across different corporations, stakeholders, and government officials, meaning that systematic issues can be dismissed as isolated incidents.

“The most frustrating thing is that there are repeated, systematic failures that everybody acknowledges, but that never seem to get addressed. Possibly the most persistent issue is assistance getting on and off trains. Every train company agrees it’s a problem, and keep saying they accept the failures, but the problem is that they acknowledge individual failings without acknowledging that it’s a systematic issue across the network. What we need them to understand is that is the system is broken. The problem is the platform, not the people on the platform.”

But for Alan, the difficulty of making such institutional change has also been instructive, and from it he has taken away one of the most powerful tools in activism: working together. Collaboration and co-production are essential, not just between disabled people and transport operators, but between other marginalised groups as well.

“This has been one of my main takeaways from the past decade. Often, we spend so much time fighting for basic rights that it can be incredibly frustrating and demoralising. And these are the times when we need to look around at our successes, and find power and energy from the people around us. What we achieve, we achieve together. When you look at all of our real successes, like Crossrail for example, the number of people who contributed to that effort is huge.

“Nothing I’ve done in the last 12 years I’ve done alone. Everything I’ve done has been in partnership or with the support of other campaigners, organisations, charities, transport operators, and allies. But I wouldn’t have been recognised without the tremendous effort and results we have all achieved together. So yes, I’m the one being recognised with the MBE, but actually it’s also recognising the achievements of everyone who has worked with me over the years.”

Even the way campaigning has changed over the past few decades reveals just how far we’ve come. What we are fighting for now, and how we are fighting for it, is very different. Alan sees this as a sign of how much has already changed, and how years of activism have brought disabled people to a place where equal rights and access are within sight.

“The trailblazing campaigners of forty years ago, who chained themselves to buses, were having to fight for their lives. They were fighting to survive. Following them it was my generation, who were fighting for some level of access. I grew up in a time where wheelchairs were still considered ‘fire hazards’, so we were fighting against that stigma as well. The current generation I think are now growing up with an expectation that they should be treated equally, that they shouldn’t have to be fighting for access and rights. The fact that these expectations are higher shows that real progress has been made. We now have a generation who are saying ‘we are here, and we shouldn’t have to worry about going out on a Saturday night with everyone else.’”

It is this progress that reveals how important the fight to make transport accessible really is, and how much can be achieved by activists like Alan. We are immensely proud that the work of Transport for All’s Co-Chair has been recognised in the New Year’s Honours list, and that years of campaigning have brought us to a point where disabled people expect to say: ‘These are our streets, our buses, our trains, our lives, as much as they are anyone else’s.’