Our Pave The Way report remains the only in-depth and independent piece of research into the impacts of Low Traffic Neighbourhoods on disabled people, and has proven to be an invaluable resource to so many. 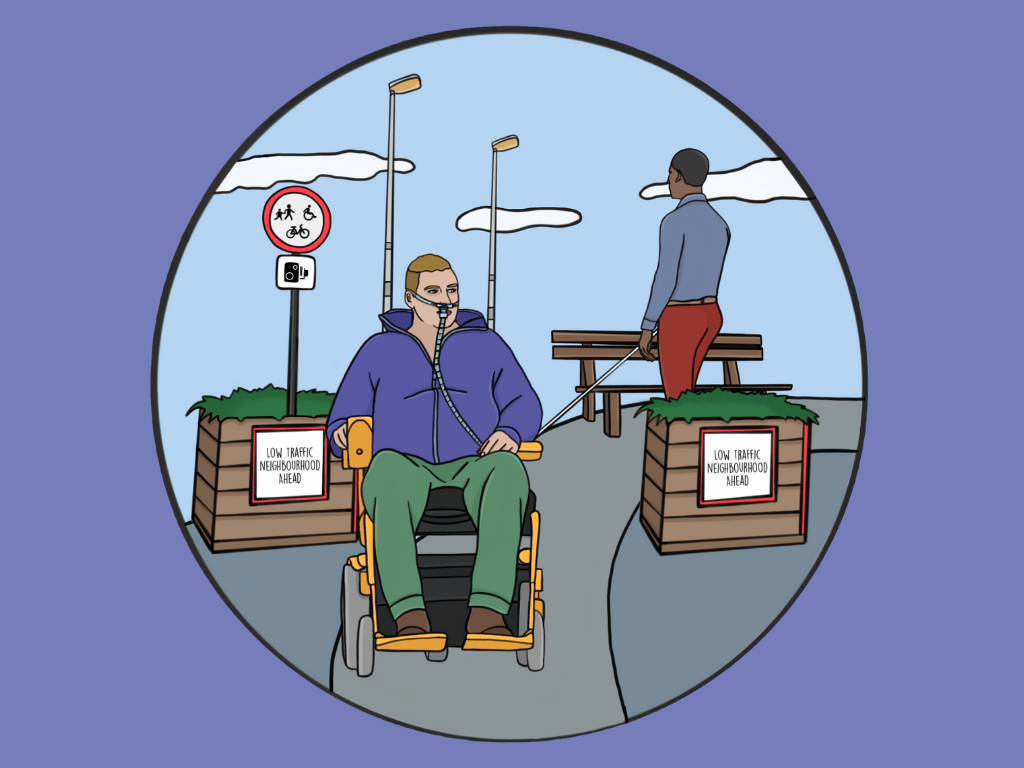 Most importantly we wanted tangible changes as a result of our work: to see a shift in how disabled people are engaged with. We wanted to see local authorities and transport providers move away from passive, reductive ‘disability forums’, and commit to a co-production model that sees disabled experts hired as co-designers of schemes from the offset.

4 months on, we are so proud of the lasting impact our work has had and is continuing to have.

The public launch of our report on the 22nd January was very successful, with huge public engagement across social media channels. To date, over 5.8k people have viewed the report on our website. We received over 4.5k engagements with our Tweet on Twitter, and garnered high praise from a huge number of accounts including politicians, campaigners, experts and individuals.

Individuals and organisations from the world of cycling and active travel praised the nuanced way the report was written and promised to take the criticisms on board. Active travel campaigner Joe Crutwell wrote “This is an absolutely fantastic report from Transport For All, and I think should be required reading for people on any side of the LTN debate.” The London Cycling Campaign welcomed the report, saying “what we had before wasn’t accessible enough, for disabled people, for anyone. We share their vision of a world where more disabled people don’t need to rely on cars”.

Pro-LTN and anti-LTN campaign groups alike showed support for the report, another testimony to the balanced way it was written. Healthy Streets for Higham Hill and Lloyd Park (a pro-LTN group) wrote “The work in this report is outstanding”, while ‘StreetsNOTForPeople’ (an anti-LTN group) wrote “finally some balanced research on the impact of LTNs”. This balance can be summed up by one individual who wrote “as a pro-LTNer, I found the report very fair and reasonable.”

We welcomed the feedback on the quality of our research. Fare City, the think-tank promoting accessible and sustainable transport, tweeted “our take is that the research itself is outstanding; from transparency of methodology to its pan-organisational perspective & use of first-hand accounts.” Another individual wrote that our report “cuts through all the posturing and gets to the heart of the issues for disabled people and LTNs”.

Politicians took notice and pledged to take action. One local Councillor urged “I urge everyone on both sides to read it and take in its lessons”, while another councillor in Enfield promised “I have asked Enfield Council to review the recommendations and report.” London Assembly members took action too, with Andrew Boff stating “I’ll be asking Mayor of London what actions he will be taking in light of this report.”

Our report garnered national press coverage. There were write ups of the findings in the Sunday Telegraph, the Times, and the Guardian, with additional reporting in the Disability News Service and Transport Xtra. We spoke on BBC Radio and gave interviews on popular active travel themed podcasts with large listenership – including Streets Ahead. Even BBC broadcaster Jeremy Vine retweeted the report!

For the first time, disabled people’s voices in all their diversity and nuance were being heard by those who had been speaking about, and for, them on this important issue.

The Pave The Way report was widely disseminated, shared and referenced throughout the transport, Active Travel, and charity sectors. Blog posts and think pieces were written by external organisations and other professionals, including Caroline Russel AM, Living Streets, Disability Rights UK, and the Road Safety Knowledge Centre. John Dales, who is a streets design adviser to local authorities around the UK and one the London Mayor’s Design Advocates, wrote in an article: “reading Pave the Way makes me want to learn more, do differently and try harder; and I hope it will have the same effect on you.”

Newsletters shared our findings far and wide, from organisations’ such as Trust for London, to James Gleave’s ‘Mobility Matters’ who wrote: “It goes to show that the best way to understand people’s views is to ask them, and listen to them. This is one of the best reports I have read for some time.”

We were particularly pleased to receive such high praise from our respected colleagues within our own sector. The Chair of IDAG called it “a contender for most important report of the year”. Diogo Martins, Inclusive Design Manager at Sustrans tweeted “this is one of the best things I ever read”, while AgeUK described it as “excellent and timely”.

Other campaign groups are using our recommendations to directly shape their proposals. In Haringey, the campaign group ‘Healthy Streets Bruce Grove and West Green’ have drafted proposals to put to the council for improvements to their LTN, offering what they think our Pave The Way recommendations look like in practice.

We are glad to see our research included in further reports. Our findings are referenced and used in London Travel Watch’s ‘The Journey Ahead’ report, and the GLA Conservatives’ report ‘Breaking Down Barriers: Making London more Inclusive for Disabled People’, among others. More recently, Pave The Way was referenced in The Centric Lab’s report on Equitable Urban Mobility.

The findings and solutions in Pave The Way have also assisted other Disabled Peoples Organisations (DPOs) with their work on access and co-production. Greater Manchester Disabled People’s Panel (GMDPP) told us “we have done a fair amount of work in GM on Inclusive Active Travel and the Pave the Way is a really good resource to add to our advocacy with LA’s. Thank you for doing that work”, while Camden Disability Action wrote “we’ll be incorporating the findings into our co-production work with the council on this issue.” We’re so proud to have created a resource that has been of use to others.

Policy makers right at the top of decision making present the most opportunity for influence and change, so we were really happy to see our research discussed in politics at both a local and National level. In Parliament, the report was mentioned in the House of Lords select committee on sport and recreation. We also had private 1:1 meetings with MPs and Peers including Siobhain McDonagh MP, Lord Chris Holmes, and the Shadow Secretary of State for Women and Equalities Marsha de Cordova.

It was this lobbying that contributed to mounting pressure on Transport For London, covered in the next section.

Several infrastructure changes have been made to Low Traffic Neighbourhoods on a local level. Ealing now allows dispensation for Blue Badge holders driving through the LTN. Boroughs including Sutton and Croydon will be introducing ANPR cameras in existing LTNS, and in other areas such as Harrow and Hammersmith consultations are open on future planned LTNs that will use ANPRs from the offset.

We understand that the majority of these schemes are devised and implemented on a very local level by individual boroughs and local authorities, following guidance set by Transport For London (or the DfT if outside London). We have therefore sought to influence on both of these levels – locally and London/Nation-wide.

To that end we have brokered new partnerships with ten local authorities across the UK, including the London Borough of Enfield, Cambridge City Council and the City of London. As an ‘Access Partner’ to these local authorities, we are working alongside the team, embedding accessibility as part of everyday practice. Our unique model is supporting change so that future Streetspace schemes are developed and delivered under the Social Model of Disability.

We also understand that it is common practice for the consultation process to be outsourced to an external agency, and so have partnered with several of these too.

We published our findings in our Pave The Way report on 21st January 2021. Just two days prior, a High Court Ruling on TfL’s Streetspace for London plan found that the needs of disabled Londoners were “not considered” in its plans, and described parts of TfL’s EQIA as “perfunctory or non-existent”. This confirmed and validated our own conclusion, that “many EQIAs are failing to properly identify the impacts that LTNs are having on disabled residents, or make suggestions for how best to mitigate these” and that “several have demonstrated a lack of necessary expertise and knowledge in accessibility and barriers facing disabled people.”

We followed our report with our Manifesto for a new model of engagement – which set out our vision of co-production which would see disabled experts hired to co-design and deliver schemes rather than passively ‘engaged’ after plans were already in place. We pushed this model heavily, meeting with senior staff at Transport for London, lobbying the Deputy Mayor for Transport and the Walking and Cycling Commissioner, and keeping the pressure on in the Streetspace Advisory Group (SAG).

As a direct result of our consistent lobbying, combined with pressure from the High Court ruling, Transport For London have issued an updated version of their guidance for Boroughs on Streetspace. This is set out in their March 2021 document ‘Interim guidance for delivery using temporary and experimental schemes‘, which makes direct reference to our findings in Pave The Way. Under ‘engagement’, they write:

“On commencing engagement, local authorities should ensure relevant scheme information is published online and is easily accessible. Materials should be tailored to the needs of the community… and provided in large print, braille, and easy read formats if requested.”

On engagement, the new guidance says this:

“When planning their engagement, local authorities should ensure that this includes engaging with groups with protected characteristics. It is crucial to ensure that the stakeholders engaged represent minority and disadvantaged groups.”

We had hoped this updated guidance would be the product of learning from the Pave The Way findings, and demonstrate this “culture shift”, so we were dismayed to find no significant changes from the original guidance that had led to such poor engagement in the first instance. The new guidance does not propose co-production.

We continue to expand our Access Partner consultancy, working with forward-thinking local authorities, and private organisations, who understand and are committed to the need for change through embracing genuine co-production with disabled people.